Log in Register
Toggle sidebar Toggle sidebar
Menu
Install the app
You are using an out of date browser. It may not display this or other websites correctly.
You should upgrade or use an alternative browser.

Found this little guy in a small antique shop the wife and I visit occasionally. SAE date of W3-79. I am curious as to when these were made as every TB 7-07 I have ever seen has a W3-79 on it. Never seen an earlier date or later date. I know these are rebranded Deitz and they are very comparable to a Fireball. Kind of a mix between the FB1 and FB11. Just as effective and definitely quieter than the early Fireballs.

Toggle signature
I work on lightbar and beacon motors.
Reactions: fireglen, OliverD, kitn1mcc and 3 others
S

Dimensionally, the TB 7-07 and Dietz 7-07 are identical to the Federal Signal Fireball FB-1. I have a Dietz that rides in my vehicle, a TB 7-07 and a NIB Yankee Chief. They are all the same beacon. The Yankee is marked on the band as "DZ" and the dome is DZ 77-707. I think all of them had W3-79 on the dome retaining bands. The artwork on the Yankee box depicts vehicles that were made in 1980. As to exact dates, I don't know, but they were definitely available from 1979 through the 1980's.
Toggle signature
Just because you can do something doesn't necessarily mean that you should do it.

I think the next SAE W3 date is 82 so these may have been a short production time of 79 to 81 then.
Toggle signature
I work on lightbar and beacon motors.

I bought one of these last year via Ebay and was rather disappointed with it. It was NOS and was a beautiful light (blue) but the focal point was AWFUL. It came with a 35-watt 1195 bulb so I swapped it out with a 50-watt 795X and, although brighter, the focal point was still terrible. Don't know if it was just my light but it really left me wondering. Mechanically, it was very similar to a 2nd gen Fire Ball with a couple minor differences but its operation seemed a bit clunky and not as smooth as a genuine Fire Ball. I always heard the lens would fit the Fire Ball so I swapped it with one of my FBH11's and it fit just fine (and visa-versa).

Around 1980 these lights were sold at the local NAPA store as the "Chief Special". The branding on the light itself was TUFF-BILT and sold for around $35 and were available in Red, Blue or Amber. The bottom of the light stated, Made to TUFF-BILT specifications in Hong Kong. Over the years I've seen this light with various branding, including JCPENNEY.
Last edited: Oct 27, 2019
Reactions: stansdds

Thebakerman said:
the focal point was AWFUL.
Click to expand...

I have two and they seem to reflect just fine. Equally bright and effective as my fireball. Maybe your reflector is bent and needs to be adjusted. They are a little clunky, the disc that turns is loose but actually can be adjusted as well. There is a small spring that applies tension to the tension wheel. Lubrication where the disk spins seems to help as well.
Toggle signature
I work on lightbar and beacon motors.
C

I have two ”The Chief”, one amber Tuff-Bilt and one blue Yankee sold Dietz.
Tuff-Bilt was a trade mark for Dietz and Yankee was owned by Dietz from 1977 to the close down in 1985.

Both of mine are perfectly focused. 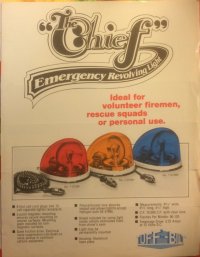 Mine seem to be focused well enough, and the one in my vehicle also sports a 795X halogen bulb, which really increases the light output.
Toggle signature
Just because you can do something doesn't necessarily mean that you should do it.
You must log in or register to reply here.