The QPP quebec provincial police or called The Sureté du Quebec announced the new colors for their vehicules .The fleet of 1100 vehicules will progressively be replace by 2020 based on studies that black and white cars are easier to see and are safer.
Lightbar that were whelen delta with halogen on top and lower section all leds will be also replaced for an all led lightbar of unknow brand for now.

This is my opinion on the matter but I think we had great looking car until now . The green and yellow stripe on the door just do not belong there anymore. No disrespect to any of you but I don't get why our car need to looks so much american being black and white,push bar and everything. heck they are not even alowed to do pit manoeuver here ,they are jealous of you guys lol .

The sq has been running green with yellow door car until early 1990's when they got replaced with all white units.

thanks for the info

Anyone know if the outboard red and blue Dietz lights was incandecent or strobe?

Incandescent, I believe. One of our members built one of these bars.

I also believe that this bar on 6282 was Whelen's first version crossbar. 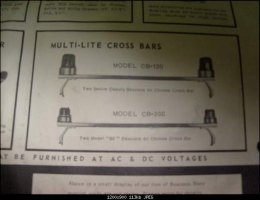 I'm pretty sure it was incadescent too
/

That's somewhat funny that they claim their new black and white scheme is more visible. Honestly, I think their new color scheme is less visible (because it is really just stealth black with a little white). This new color scheme seems to be what many agencies use for aggressive driving, DUI, and other task force vehicles b/c dark colors are less conspicuous. The one thing that I was pleased to see on the new scheme is that they still have "POLICE" prominently displayed on all sides; I think that many agencies fail to properly mark their vehicles in big letters indicating SHERIFF, TROOPER, etc and just go with a small seal on the door and the agency name small text

I think the PBs are a great idea (even if they don't use PIT) because it's added occupant safety in the event of a front-end collision, and it can be used if the agency allows other non-emergency uses for the cruisers, such as pushing stalled vehicles off the road. I think that the most neglected area for police cruisers, though, is the rear, and i wish that more depts would use large reflective striping there

Honestly, I'd be curious to see the study and the source of it, because there are so many studies out there, and I'm sure that another study will contradict this one. For example, one of the depts in my county has neon green trucks (similar to Miami Dade), and they claim that the color is more visible. Although I definitely agree that they stand out, i also read another study that yellow, green, and other non-traditional fire truck colors are more dangerous b/c the public doesn't easily recognize that they're Fire Rescue vehicles. I can't say that I favor one study over the other b/c I see the validity in both, but I am just throwing that out there b/c there are so many contradictory studies floating around. I don't think 1901 will ever touch this subject (vehicle/apparatus paint color) head-on for that reason, among others.
Last edited: Jul 14, 2017
"In Squad, We Trust."
OP
OP

Totaly agree with you , I also thing that the cars will be less visible .
As far as the push bumpers, I remember when they anounced the installation of the PB on their cruiser that it was going to be used to ,just like you said, push vehicule off the road wich I never seen happening or at least the police officer I talked to never used .
/

if you scroll down this article you can see many interactive view of the before and after cruiser.

Also this article state that since the accident that almost go killed two officer the numbers of cruiser with a partition will go from 140 to 382.
The suspect was handcuffed with his hands up front since he said he was injured and out of the sudden hell broke loose , he jumped on the steering causing a head on colision with a semi.

Looks like a custom whelen justice with both CON3 and LIN6 modules, and ION-T's externally mounted to the justice, pretty unique

Their first mickey mouse style crossbars like the one on the 73 were not Whelen I discussed a lot with other enthusiasts about that. Some Ontario municipal department had those and they were supposedly made by Maranda Montreal sold for farm vehicles. I don't know any real survivor yet, still digging tho.

I like the brown/olive green cars with the yellow doors.
I'm one of them.
OP
OP

it was pretty unique back then.
/

dmathieu said:
Incandescent, I believe. One of our members built one of these bars.
Click to expand...

I did.
I am in the process of rebuilding many of the different SQ lightbars that were used throughout the years.

Marty1 has one of the older version, which is Dietz 2-11 with Grote lollipops.

cant wait to see the pics
/

Why no spotlights?
OP
OP

Spotlights are not that common in quebec .Only few agencies runs them and it only started a few years ago but I guess it's going to become more popular .push bumpers were also rare in the mid 2000's and around 2010 they started installing them now it,s almost a common thing .
/

The brown in the new graphic scheme is a little out of place.
"K-Mart"
Emergency Communications
OP
OP

in fact its dark green but out of place anyways
/