I have a chance to get two, retired police Star Sabre, 48" bars that are clean. He wants 200 obo for BOTH. One has a short cord. They have traffic advisors all clear lenses.

This bar collecting is a bit of a curse I tellya...but man it looks like a great deal and from YouTube they seem to be pretty nice.

Thoughts about them? Worth the money? If I decide not to get them, I'll gladly share the link to the seller so one of you can have them
E

Edit: one of the bars is a Lazer. One is a Sabre and one is a Lazer. He will take 150 for both, but I'm guessing these will be controlled by some computerized box... I don't know.
E

Ok I got the bars, but a bit disappointing. He had pictures of a Sabre and a Lazer he was selling, but when I met up with him, he had two Lazer bars, one a 47? Inch and one a 37? Inch, and no Sabre. Apparently he has like a ton of these bars, because he said he grabbed me the two better ones. While they are not in bad condition, it was not what I expected. The one in the video and pictures had better domes and nicer feet. Mine have semi dirty feet and kinda a bit faded domes, but not bad. I believe they can really be polished up. Nothing is broke and is complete, plus he said he tested it and works great.

I got both of them for 150.00, so while not what I was expecting I do believe I made out on top with these bars.they seem to be fully loaded. At first glance I see takedowns, alleys, an arrow stick and huge led lights all around. They are from ex sheriff cars.

I'm not sure if I will hold onto these, the wiring looks way complex and I have no idea what controller works on it. I see main power cable, the functions cable and the areowstick control cable. Also I don't know how I can change these to all amber, since they look like one piece LED modules with no color filters. They shine red, white, blue and amber plus an all amber traffic advisor. If I have to buy all new modules to make it amber ...it probably isn't worth it to me.

I have no clue how these bars work...is the color changed electronically somehow? Or do I have to buy a whole new complete amber led set for it? That could cost way to much for me to bother and would probably sell these. Also they are very heavy.... I thought they would be way lighter than any old rotator....I was wrong.

Some pictures of them loaded into my car. I'll get better ones later. Thanks for reading if you get this s far.

I don't believe the wiring will be as complex as it may initially seem. They appear to be similar to the various Star bars I have had over the years with a main power and ground, then one cable that controls the arrow via their arrow control box (still available), and one cable that controls the warning, TD, and AL functions by 12v + trigger wires.
Reactions: Eric2.0

I actually have a 54” (i think it was a 54” anyways) that i got from a local chief when i did a liberty for him, wiring is actually really easy.

The front of mine has dual color modules (red/clear) and the rear is a combination of red/blue/amber. swapping out colors is easy too, its just a 8 pin connector. I’ll grab a pic of an extra red one i have to show ya. 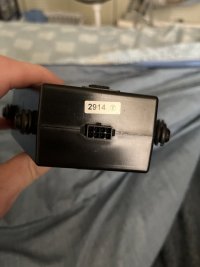 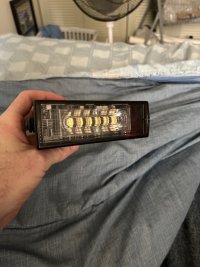 I played with the 46 and got some of the stuff to work and it is quite bright in direct sun which is cool. I took what I though is the areowstick cable and hooked it up and I think I fried something, cause it won't work at all. I should of got the wiring diagram before I started. I'm such an idiot, hopefully I just blown a fuse like I did in my jetstrobe when I messed with that.

I noticed the areowstick modules actually split the colors(yellow if they worked) and half of the led were flashing red/blue in the same moduel. I got the alley lights working, takedowns, it has cruise lights and I got some random flashes around the bar. I'm going to download the wiring diagram after I find the exact model number.

I'm going to get the wiring diagram and learn about these bars, then test everything. I might keep the 53 inch for myself for my f150 and scrap the halogen rotators I was going to use. I can see LED are way easier on the juice. I let this bar flash for around 15 minutes off a lawn tractor battery and got no fade. The halogen would of killed it in 5 minutes.

I only payed 150 for both these bars and while the lenses are kinda faded, they really aren't bad and I think they can be cleaned up real nice. I have a guy that does that, I may have him do this one.

All in all I think this was a good deal, 150 dollars, two bars a 45 and a 53, no cracks, no dents, just some sun faded lenses and they both have full wiring harnesses which is real nice.

Well here are some pictures

Some of my modules dont match the others and thought about swapping them to make all the modules the same, but with my luck for looking for stuff i decided not to and keep it as it is
Reactions: Eric2.0
E

Here is the 46" Laser, fired up. I didn't get the areowstick to work, I'll have to check the fuse. I connected the fat red wire to 12DC and tried each control wire but nothing.

In this video I only lit up the main flashers front and back, not the takedowns or alleys, just because I didn't want to get too much going on. I'm new to these led bars so I'm taking it easy. Cool thing is, today I got the wiring diagram for it on stars website and tested each trigger wire to see if they cordinated to all the functions stated in the diagram and they did. I can also use a trigger to change patterns ..that was cool.

Anyways, here is the video of my central NY Laser, sheriff light bar in 46" along with my redneck voiced, stuttering commentary, lol. Oh well, making videos is not my fortay.

EHFD_Tower_751 said:
Some of my modules dont match the others and thought about swapping them to make all the modules the same, but with my luck for looking for stuff i decided not to and keep it as it is
Click to expand...

I'm going to try and find amber and white for my 53" bar. Not sure what the price will be but I'm not going to spend a ton on this. If they are very expensive to get, I'll just leave it be and leave as is. Decide to sell or keep. Lots of decisions, lol

Yeah. Front of mine is all red with 7 takedowns (front is dual color red white with red being warning and white is all takedowns).

Interesting bar. I don't think I have ever actually seen one lit up, so thanks for the video.
Reactions: Eric2.0
E

tsquale said:
Interesting bar. I don't think I have ever actually seen one lit up, so thanks for the video.
Click to expand...

I lit it up in the dark last night and wahhh!! It lit up my entire yard. I had to shut it down immediately before all the neighbors got concerned and curious, lol. That bar is still sporting full police colors and patterns. I might have a plan for this one, call me weird, but I like this idea. Set it up as a deterrent for would be theives and unwanted guest. I would put it on a motion activated switch that would light it up if any intruder decides to mess around. It would cause confusion which would give me an advantage. I had trouble like that in the past.