What was your first?

Silver Supporter
Just an idle curiosity, what was the first emergency vehicle you ever rode or worked in?

For me, it was 1995 Ford Crown Victoria for Enumclaw Police as an explorer. It was equipped with an Edge 9004AK, Fed Sig SW400SS switchbox. Motorola siren, dual Unity post mounts and a Setina PB 300. It also had 2 Motorola radios, I just don't remember the model.

At lease that's what I remember of it.
The views and opinions expressed in my posts are solely those of the author and do not necessarily reflect those of eLightbars.org, LLC, it's ownership, staff, general membership, the Vatican, your mother, O'Reillys auto parts stores, Peter Griffin or anyone with good taste and or sensibilities.

Gold Supporter
1985 GMC 1ton with enclosed body. Built as a construction/ work truck and converted to rescue/ems truck. Code 3 XL9K and Weldon par46 round flashers with a C3 siren. Had 2 vhf radios, one for county and one for hospital comms. My era was mids 90s. I have a bar that came off the matching engine we had at the time. 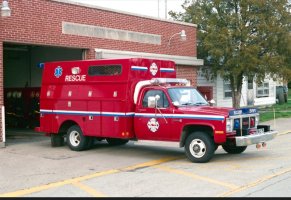 Silver Supporter
A very, tempermental.. putting that mildly mid 80's Ford 8000, It was in service up until 2018 when it was sold. The current owner lurks around here on elb I'll leave it upto him to post how cranky it still is.. lol
Looking for a Drivers side mirror for an Aerodynic 24RMC  (CA Aerotwin)  PM me if you have one!!!

There are 2 types of lights.... Blinkies and no Blinkies... all mine are blown.
G

This is the first vehicle I ever drove, a 1980 Chevy Nova with a Federal Visibar. 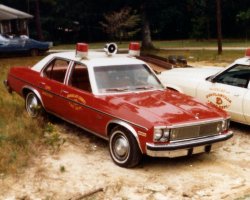 The first rig I was assigned to is this van with the twin Fireballs on the fender and the Federal 184 on the roof. 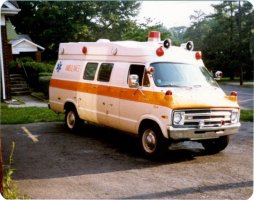 I work on lightbar and beacon motors.

Platinum Supporter
This was the first fleet I ran with... video from 2012 potato phone. Cant get the photos to upload unfortunately... 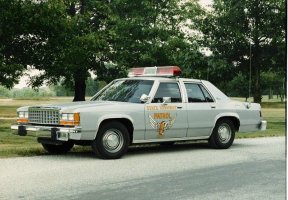 ​
When I started with the Geneva on The Lake Ohio Police Department in 1989, they had a Ford LTD Crown Vic just like this that they got from the state. Even came with the Yankee 911 lightbar because the OSHP had switched to Federal Signal Jetsonics. GOTL simply added their logo to the door.

You could hear the rotators turning, and in the winter time the drivers side would occasionally stop. Rolling down the window and smaking the bar would get it going again.

They also had a Plymouth Gran Fury with a Federal Signal Twinsonic. 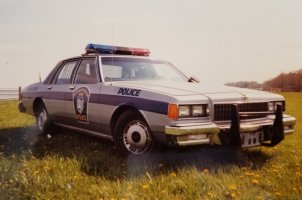 Soon after I got there they got this Chevy Caprice. Code 3 MX7000 with intersection sweeps, VCon siren, double flash alternating wig-wag headlights, push bumper, and bars over the back side windows. Loved this car.

The following year I left and became a State Trooper, but that Caprice remains my all time favorite patrol car.

I took it to Geneva State Park to take that picture. The ground was softer than I thought, and I almost got it stuck trying to get it out of there. Left a muddy tire track trail leaving the park. Took it straight back to the station and washed it. Park Rangers probably wondered what a-hole drove on the grass. Damn 21 year old rookies!

I never got one stuck in the median as a Trooper though. Just hit it fast enough to slide out the other side. LOL.
Code3Garage

Also the hubcaps were unique for 1986 as well. I kinda liked the look of the 1986 ones instead of the frisbee style that stayed with the Caprice up until 1994 when they went to center caps instead- when I think they got tired of all the complaints of those frisbee's flying off everytime the car hit a pot hole <evil grin> My department had several storage bins full of hubcaps taken off of decommissioned cars because of this. <evil grin>
"He's not just a dog, he's a cop. And he's not just any cop, he's my partner." -K9

RyanZ71 said:
Also the hubcaps were unique for 1986 as well. I kinda liked the look of the 1986 ones instead of the frisbee style that stayed with the Caprice up until 1994 when they went to center caps instead- when I think they got tired of all the complaints of those frisbee's flying off everytime the car hit a pot hole <evil grin> My department had several storage bins full of hubcaps taken off of decommissioned cars because of this. <evil grin>
Click to expand...