To increase my ability to see at night, I have installed two 8" 130 watt halogen Rally 800 lights (1 spot and 1 flood) and two Whelen PAR 46 LED spotlight bulbs on the push bumper of my 2011 Ford F150. The Rally 800s are in stainless housings and the Whelen PAR 46 LEDs are in Warn stainless housings. I took a series of photos to show the different lighting results. I am not entirely pleased with my photography (my camera failed to show most of the lighting effect on the left side of the road and just has black emptiness showing instead.- I don't know why), but this is what I have right now. 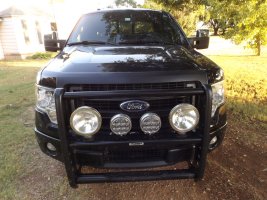 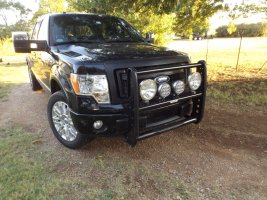 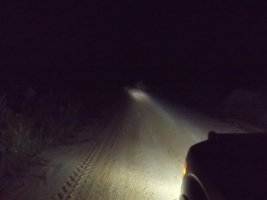 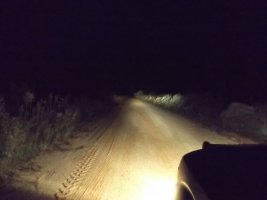 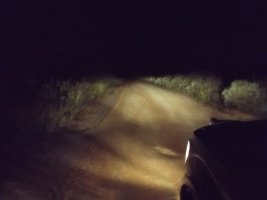 I am going to retake the photos soon.

For pdk9: As far as the rest of the truck goes, all the emergency equipment and police stuff that was installed has been removed, now that I  am retired and just a normal NW Oklahoma rancher that does not have any cattle (it lets me wear western clothes, high top buckaroo cowboy boots, and cowboy hats in town without being embarrassed). This is what it looks like today (09/25/2015):

Well, it looks like my camera won't take decent pictures in the daylight either. I will work on this.
Last edited by a moderator: Sep 25, 2015
Permanent Texas Peace Officer License - LEO 1976 to 2015 - Patrol / Motorcycle / Administration

That is impressive looking!
Wilson LED conversions, repair, and prototyping

Looks good. What about the rest of the setup?

Also, why the decision to go with rally halogens instead of a LED floods?
"In Squad, We Trust."

I love the par36
a little bit of SYNC goes a long way!
OP
OP

pdk9 said:
Looks good. What about the rest of the setup?

Also, why the decision to go with rally halogens instead of a LED floo"ds?
Click to expand...

"What about the rest of the setup?" - If you mean other emergency equipment, it has been carefully removed. I retired in May after 39+ years as a LEO and I am converting my LEO equipped truck to "normal" personal use. It had a full compliment of premium emergency equipment and it was upfitted better than most agency owned police vehicles. I have no interest in "posing", now that I am no longer a LEO, or being  mistaken for a deputy as our county sheriff's office uses all black pick up trucks on patrol, so the quicker I could get the emergency equipment removed, the better.

As to why I used the Rally halogens -

#1. I had them in storage. I bought them years ago (2 spots and 2 floods) for almost $1000 for the four and have only used them intermittently. The current street price is still just under $200 each. I could not justify buying LEDs while I have nearly $800 worth of lighting sitting in my shop.

#2 - To my eyes, they provide more superior lighting than any LED I have ever tried.

#4 - I like the looks of them. That is the same reason I mounted the Whelen PAR 46 spotlight LEDs in the Warn housings. I just think they look better than my other options would have looked.