We had similar clowns locally that were finally shut down, and I've seen many videos of some really REALLY bad ones. But this guy has to top them all...


Serial Police Impersonator Caught by His Own Body Camera

Jeremy Dewitte's first arrest for impersonating a police officer happened more than twenty years ago and he hasn't slowed down since. In fact, Dewitte was arrested for impersonating a police officer three separate times in the last three months of 2019. In the interim Dewitte was hard at work racking up dozens of minor violations, with the occasional felony thrown in. To top it off, Dewitte is remarkably good at violating his probation. In researching this case I created a spreadsheet to keep track of Dewitte's Florida record. See the craziness for yourself: https://tiny.cc/dewittecases

The story of Dewitte's first arrest takes more space than I have available here, so for now we begin when that case ends. On September 30, 1998 Jeremy Dewitte entered a plea of no contest to charges of impersonating a police officer and theft, instantly becoming a convicted felon. He was sentenced to five years probation, banned from Mobil gas stations for the duration, and ordered to repay a bit more than $14.
Violation #1, details pending* 7/14/99 - Warrant 9/08/99 - Arrested 9/13/99 - Allegations admitted; 8 days jail.
Violation #2, details pending* 9/28/00 - Warrant 10/2/00 - Arrested 10/6/00 - Allegations admitted; 6 months house arrest, and 3 years probation.

At this point you need to know that Dewitte's probation officer had told him "to find gainful work in a field other than security." Then...on May 7, 2001 someone told Dewitte's probation officer that the convicted felon was in possession of a firearm. Who reported him? Why, one of the people that had hired him... to work as a security guard. Through his company "Dewitte Security." Genius.

The next day a warrant was issued and Dewitte was arrested, somehow managing to pick up new charges too. This is how it went down: "On 5/8/01, the arresting officer responded to 1017 S. Kirkman Road, Apt. XX, to make contact with the defendant, who had an active capias for VOP. The arresting officer made phone contact with the defendant who advised that he was enroute. The defendant pulled up in a blue four door Chevy Lumina with dark tint. As the defendant opened the driver's door the officer heard a police scanner with OPD dispatching. The defendant had the scanner hooked up next to the driver's seat. The officer heard OPD units from the Southwest sector being dispatched to calls.

Further inspection of the vehicle by the arresting officer, along with assisting officers, revealed white blinking lights mounted in the rear window and side wing windows. Also mounted in the windshield, were more lights behind the tinted strip, which when lit shined flashing blue." On 10/8/01 Dewitte's probation morphed into a one-year sentence in Orange County Jail. And you still don't even know about Dewitte's first arrest. You know, when he pretended to be a cop in order to steal $14 of gas from a Mobil. The full story is at http://tiny.cc/firstarrest

Shifting gears: The body-worn camera footage in this video was obtained through a Florida Public Records Act request. I had asked for a complete and unedited original-resolution electronic copy of all video records retrieved from Dewitte's body camera (which had been seized), but at the time the request was submitted the sheriff's office was not legally required to release those records - and they didn't. Instead, they voluntarily released most of the footage in this video. It's important to recognize that their editing decisions are intended to paint a particular picture of Dewitte, and they raise obvious questions about what was omitted. I did not want to wait any longer before sharing this footage with you, but I want you to know that we are nowhere near done with this story and that we will soon have all of the body camera footage — and much more — from this and other Dewitte cases. You can expect an update then.
Click to expand...

What a surprise, he's also a multi-time sex offender...

Man impersonating cop gets in fight with actual deputy

A registered sex offender who was impersonating an officer while directing traffic for a funeral procession reached for his gun during a fight with an actual deputy, according to the Orange County Sheriff's Office.

The deputy involved said he was driving his truck near Minnesota Avenue and Highway 17/92 on Sept. 16 when he noticed a man with a motorcycle who appeared to be a law enforcement officer directing traffic, records show. A Chevrolet Tahoe then pulled up and that driver, Jeremy Dewitte, got out and then directing traffic, according to the report.

The deputy, who was off duty with his wife and son, saw this same pattern happen at several intersections along Highway 17/92 until Dewitte directed the deputy to move into the right lane, which he was blocking, the affidavit said.

Dewitte, 39, was yelling at the deputy, telling him, "You cannot drive in and out of my funeral" and, "It doesn't matter, get out of my escort, (expletive) boy," records show.
Dewitte is also accused of slapping the hood of the deputy's truck as he drove by and repeatedly placing his hand on his holstered gun as if he were reaching for it.
Click to expand... 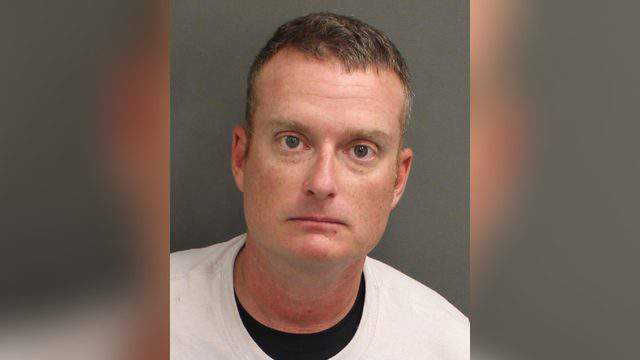 Deputies say a registered sex offender impersonated an officer while directing traffic for a funeral procession.

Man impersonating cop gets in fight with actual deputy

Platinum Supporter
yup... in my opinion he's a certified shitbird

What you consider a snide attack by me is really just a humorous statement.
I'm sorry you lack humor.

Prison won’t be fun for him.

Sure it will. It'll give him a chance to try and play correctional officer now.
The views and opinions expressed in my posts are solely those of the author and do not necessarily reflect those of eLightbars.org, LLC, it's ownership, staff, general membership, the Vatican, your mother, O'Reillys auto parts stores, Peter Griffin or anyone with good taste and or sensibilities.

Imagine. After a long and productive life, your grandfather passes away peacefully in his bed. Tearfully, you arrange a funeral, and you want to make sure it goes off smoothly so you can mourn in peace and get on with life. You get in your car to escort your grandfather one last time, and you start to follow the casket to his final burial place. All of a sudden, some asswipe on a motorcycle flies past you with sirens blaring, followed by 2 more vehicles sporting more lights than the Federal Signal warehouse. You try to cooperate with their commands, but one guy seems to suffer from schizophrenia, as he orders you to stop and to go in the same hand motion. You wait for him to clarify what he wants, while he stalks towards you calling you "an effing idiot". Upon closer examination, you realize he's not even a police officer - he's just a mentally ill jackass with too much money and too much freedom.

I cannot believe the blocked the entire interstate (around the 10min mark) like that! Zero traffic management planning went into that. Caused dangerous congestion and I'm surprised there weren't any crashes. That entire video is absolutely remarkable and not in a good way.

I almost wiped one of these asshats out in Virginia. Came roaring up an onramp and stopped dead in the traffic lane. I crest a rise and there he is, purple light cloud.

Never understood the hurry to plant a dead guy. Whenever my guys had an escort, I had them shut down lights when they got to a red light. Turn green, turn lights on. No sirens.
A

He's able to carry on an entire -civil, polite- conversation before the judge without raising his voice or using a single expletive, while on his bike he couldn't go three words without cursing and swearing. Maybe it's the exhaust fumes that affect his speech and temper.
J