Some of you may have been around long enough to remember the first version of the eLightbars message board. It was an account named "RAM4" on a service called boardhost. The RAM4 was the username my father Robert Anthony Marcson got for the family on CompuServe and AOL (RAM1, 2 and 3 were taken even then) when those services came out. The initials stuck and I have used them in usernames and email addresses even to this day. One of the first questions I asked on AOL was to settle a $5 bet between my father and I about whether Pennsylvania State Police had rotating or strobe lights at the time they began moving to Visions (1994). The answers I got were less than totally accurate but some people (a few who later ended up using this site) did respond with the correct info and some close up pictures of the Commander PA5200 Whelen strobe beacon I collect. The beacons are obviously strobe and I gained $5 and appreciation for finding info about my interests online. Shortly after AOL became expensive and the internet became "free" is when I started the "RAM4" board. The firehouse.com forums were not a really meant for light questions, and I wanted to focus on collecting the equipment. Since then I have followed my passion for both the equipment and the professions they represent through various methods and I have worked continuously in emergency services since 1998.

On Aug 29th Tony "RAM4" Marcson died from natural causes under the care of his family and Hospice. My dad always supported my unusual hobbies and one way I tried to thank him was by keeping his original username part of my online life. He took that $5 bet knowing I was right but he wanted me to research the topic myself. His support and clever but caring methods of helping me follow my interests served me well. I hope everyone who has enjoyed this site and my various contributions to this hobby and related professions over the years can keep in their thoughts that the initial venture into the online world for this hobby was supported by "RAM". 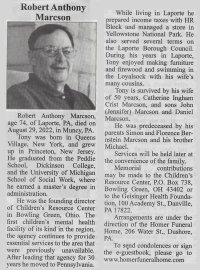 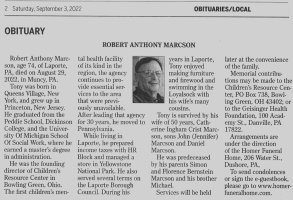 Thank you for sharing this story and memories. Sounds like he was a very inspirational man. Peace be with you.
Toggle signature
Let an electrician undo your shorts
Reactions: JohnMarcson

I'm sorry to hear of you and your family's loss. Thank you for sharing the story and may you find comfort in the memories like those
Toggle signature
-Tony-
Site Moderator​
Reactions: JohnMarcson

Sorry for you loss John….
Toggle signature
These are not the droids we're looking for....
Reactions: JohnMarcson

Sorry for your loss, John.
Been there with the Hospice thing, they are great.
My prayers for you and yours.
Reactions: JohnMarcson

Condolences sir and to your family.

May he rest in peace
Reactions: JohnMarcson

It sounds like you had a great relationship with your Dad. I'll pray for Dad, you, and your family.

I remember the RAM4 days well... My condolences to you and your family. I will pray for you all.
Reactions: JohnMarcson

John, I too remember RAM4. To you and your family my deepest belated condolences.
Reactions: JohnMarcson
T

I'm sorry for your loss. Welcome to the club you wish you could quit.
Toggle signature
Yes, I know... my start date is earlier than your birth date.
Reactions: JohnMarcson
C

My condolences. I don’t get on the board much lately, but as a user from the RAM4 days, I had to respond.

Sorry for your loss, John. He sounds like quite a guy!
Reactions: JohnMarcson
R