Hi all. I've been given a Whelen Edge 9000 (according Edge 9000 being stamped into the amber lens') but cannot get it to do anything but click a relay. It no longer has its sticker on the base so I can't find it's model number from there. The power supply inside has 66365E on the bottom.

When opened up it has 4 wires coming from the power board, Red +12V, Black 0V, Green which when given +12V activates a relay and a White or light Violet which goes into the 4 pin connector with the others. This wire also has a voltage reading of about 6 volts.

Everything I've seen while looking into this shows a 11 or similar pin connector which powers different light actions but this has only those 4 wires coming out of the power board. It then has four, 3 pin sockets which go off to each corner strobe light.

Thanks for any help given.

Silver Supporter
I believe your Violet is the low power, does it have takedowns or alley lights or just strobes??
OP
OP
B

It's just the 4 strobes. Thanks

The standard 9000 setup would include a power distribution board and one or more strobe power supplies. It sounds like your bar was stripped and reconfigured, or it could have been an economy version from the factory. Pics of the power supply would help identify it.

In any case, some combination of + and - 12V power to the red, black, and green wires should fire up the strobes. If that doesn't work, replacement 4-output strobe supplies are plentiful and cheap.
OP
OP
B

Thanks for the replies. I do have all 4 strobes but only have 2 connected for testing. I am also fully aware of the dangers of capacitors so am careful while working with this unit.

Here's a few pictures of what I have electrics wise for this light unit. 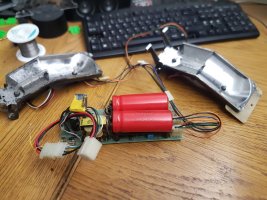 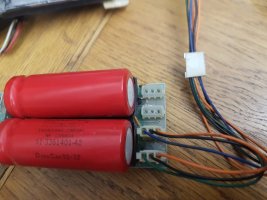 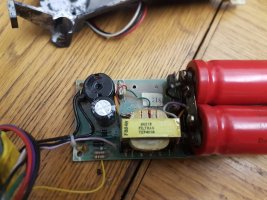 Lifetime VIP Supporter
Unfortunately, I think there's something wrong with the power supply. It should have flashed as the wiring is pretty simple. I believe the relay you hear clicking was a "cutout" that would limit flashing to only two outlets.

There seems to be a thin yellow wire coming from underneath the board. Is that just a stray wire on the bench?

Given the size and shape of the transformer and the size of the capacitors, I think you have a double-flash power supply. The "F8848" printed on the transformer might indicate it was made 48th week of 1988. The caps appear marked as "95-32" which I assume to mean 32nd weak of 1995. This would imply that the power supply was repaired around that time.

Practically speaking, Comet-flash EDGE power supplies are still fairly easy to obtain (as MtnMan says) but the older double-flash aren't quite as abundant. If you wanted or were expecting Comet-flash, you should be able to find an inexpensive replacement.

If you're interested (for curiosity's sake) in trying to get this PS to work, then I guess the first question is if you're getting high voltage on the capacitors (measure carefully and safely!). If so, then the inverter is working and the problem is somewhere in the timing/trigger side. If not, then the first tests would be around the three pins on the power transistor which I suspect might be one of these: https://www.vishay.com/docs/91203/91203.pdf

Also, make sure to measure resistance between the legs of devices and the PCB tracing into which they're soldered to catch simple cold-solder joints. That would be an easy fix.
OP
OP
B

Thank you for the information. The thin yellow wire is just a stray wire I hadn't noticed. In terms of compatible power supplies, I've read that a lot of Whelen stuff is interchangable, would the likes of this unit swap right in? Ebay Link

My end goal for this unit is just to have some flashing lights so the exact pattern or number of patterns doesn't matter to me. The light unit is more for the look than use, however I can't just fit a dead light unit to my roof. I have already been in a few situations where they would have actually been put to proper use but my hazards have had to step in instead.

The lacquer on these boards makes probing and soldering a pain. There were a few joints which had corrosion on them but re-soldering them has had no positive effect.

At the end, I'd be happy to pay £30 for that ebay unit if it should be good for powering this light bar. They say that wiring harnesses are available and if needed, I can always solder a few connector ends on to adapt with a good bit of heat shrink round them.
R

Lifetime VIP Supporter
I don't think the UB412 would fit correctly in an old EDGE. It is designed for the Ultrabar/9U series. Check out these - or better yet, if you can find and "EB6", here are Whelen's instructions for upgrading older EDGE 9000s. It might help.

Your measurements indicate the possibility of a bad power transistor (though I can't guarantee it ).

I'm in the UK so my ebay options are limited without shipping and import costs. However, I searched Whelen EB6 and by luck, the same seller as my previous link has this: Ebay link
OP
OP
B

I should hopefully have the EB6 tomorrow. Just to be sure, to power the unit is it just +12V on red, 0V on Black and then apply +12V to any of the other wires to trigger it's light outputs?

Thank you. I'll report back when it finally arrives. Was supposed to be yesterday and now looking to be tomorrow.
OP
OP
B

Great news, it all works. I'm planning on giving it a good clean to get it looking nice again and I'll post back with the results.

Silver Supporter
Now add takedowns, and rear flashers and alleys and it will be happy!
OP
OP
B

So a quick mid-project update. 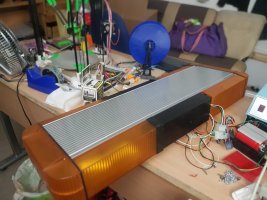 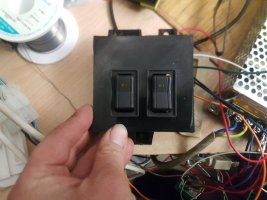 After struggling for weeks to get my 3D printer to print a 5 hour print of flexible plastic, I've finally sorted out my roof mounting and it's on. All I need to do is add some feet to stop it tilting forwards/backwards.

I only had to drill a hole behind an existing gromet cover so barely any body modification to make it fit.

Thanks to everyone who helped to make this happen. 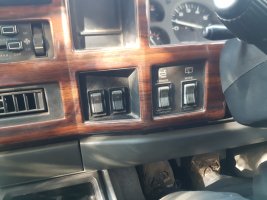 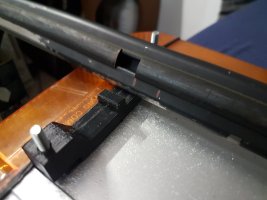 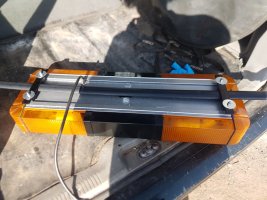 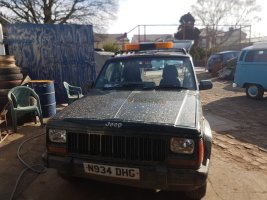 Silver Supporter
You could have gone with a magnet mount, I use 4 90 pound pull rubber coated magnets on my mini edge for 360 pounds of holding power and at 90 mph it has yet to move, only time I got her to move was when a drunk driver tboned me and my bar changed position from the impact. But nice job on that setup!
OP
OP
B

I generally do things with what I have available where permitted. Magnets didn't even cross my mind. I didn't do any research into the how, only this thread to help get it working. The 2 options I had in my head were directly mounted to the roof or how it is now. I did not want to drill into the roof and as it is, it's easily removable when the roof cross bars are needed.

The only issue I can think of using magnets would be that the lower height would put the rear lenses behind my roof cross bars. Currently it stands above everything. If there ever is a next time, I'll be sure to consider magnets.

Silver Supporter
Make sure they are the rubber coated 90 pound pulls metal will scratch your roof and too light will make it fly off the roof.
OP
OP
B

I'm back again but only to add more to the lightbar. My mounting stabilisation solution was to create 2 bars that latched into another roof rail. It's very easy to remove but very stable when mounted. 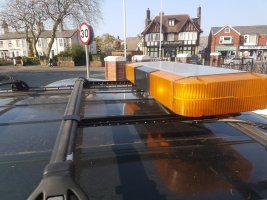 My next addition is a set of reverse lights/general light courtesy of a pick and pull scrap yard. By a stroke of luck, when I stripped them down to just the LED circuitry and the heatsink, it slid in and perfectly. Loose enough to slide across but snug enough to stay in place. 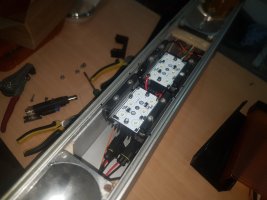 Now all I need is a clear lens to fit in the place of my black piece which I'm struggling to find in the UK, or even elsewhere at 8 1/2" / 215mm long. I'd even be happy to find 2 lens' to fit with a divider between the two. For the time being I'm planning on cutting out the face section of my black piece and sticking some clear plastic over.

The UB412 will fit in the frame and wire up no problem, but you will need a different wire harness unless you want to cut wires, We carry all the parts for those bars and can ship worldwide
Your #1 Edge strobe bar rebuilder and parts supplier!
Www.Ranger-Services.com
You must log in or register to reply here.
Share:
Facebook Reddit Pinterest Tumblr WhatsApp Email Share Link