I sent off 4 blue Freedom (passive) LED modules to Wilson to be changed to all amber. I recently received them and promptly tested them. I do not have any test equipment, but by eye they appear to be the newest (brightest) version of LEDs. There is no noticeable intrusion into the housing where the LEDs were replaced.


I powered one of these up alongside an original corner that I still have. The heat output on the rear of each of the housings felt the same.


The conversion installation appears to be as well done as the original build. The conversion was invoiced at $16 per line of LEDs.


Counting shipping both ways, I spent a total of $155 for all four Freedom corners to be converted. I am very pleased with the result.


Here is the photo album I created to show before and after comparisons:


Here is the link to Wilson's ELB thread: 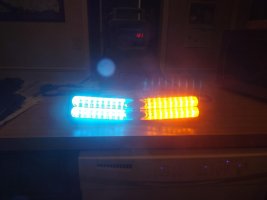